My latest One Room Challenge project is now ‘in the can,’ so to speak. Eamon’s big boy bedroom is complete, and he is now sleeping in it! It is such a relief to have finished it. We photographed it on Friday of last week, and I revealed it to him that morning (he slept in the guest bedroom the night before while I worked away to complete and style the space for the photo shoot into the wee hours of the morning).

As you may know, Eamon has a big brother, Quinlan, and if you have more than one child, you will undoubtedly have witnessed sibling jealousy -slash- perceived egregious unfairness. When we did the reveal, of course the first thing Quinlan said (aka whined) was, when are you going to do this to my room? Um…I already did. I had to pull up the photos of what his room used to look like. And in doing so, I realized that I don’t think I ever have posted on the blog pictures of his nursery in our current home, or the evolved big boy bedroom he now has, which I did about four years ago.

Here is what it looked like when we first moved in and got established in our home. He was about 18 months old, and still rocking it in his crib. 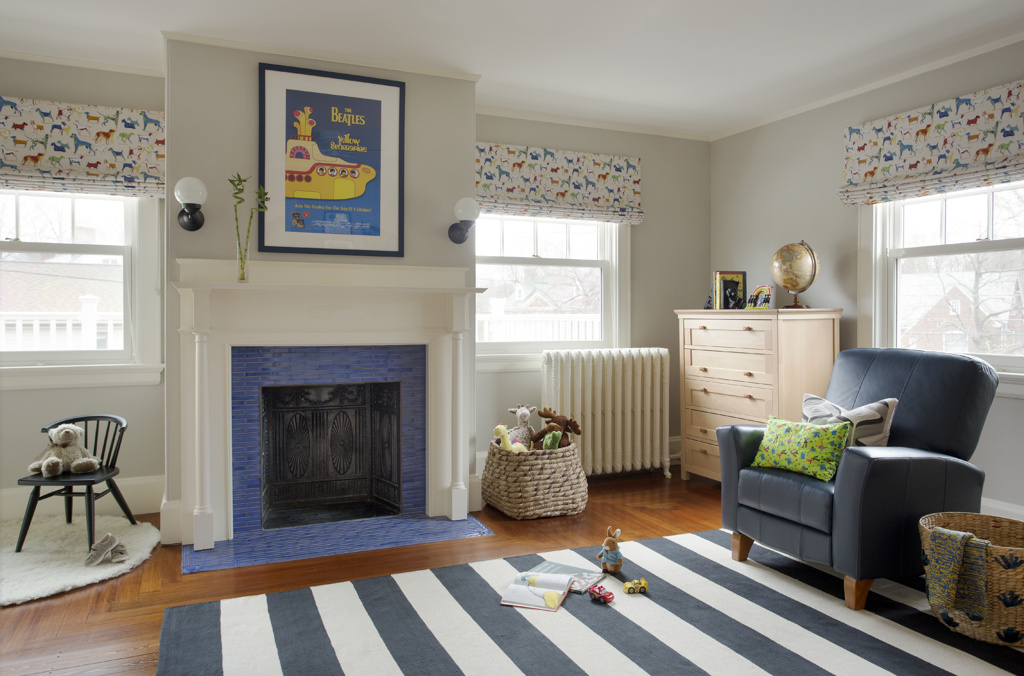 Remember that all of this furniture was purchased eight years ago, before I had any inkling or even a twinkle in my eye about having a career (or even a hobby) in interior design. 🙂 I positioned the crib where I knew we would want to put the bed, so I could hang the gallery wall and know I wouldn’t need to move it and do it all over again in a year. We used a large (8×10) area rug with a full-sized bed in mind.

When it came time to move up from the crib, it was a relatively easy change. We had purchased the bed conversion kit (rails) with the crib – actually, we thought we had bought the toddler bed conversion, and were surprised when we opened up the packaging that had been in storage all that time, and found full bed rails inside! 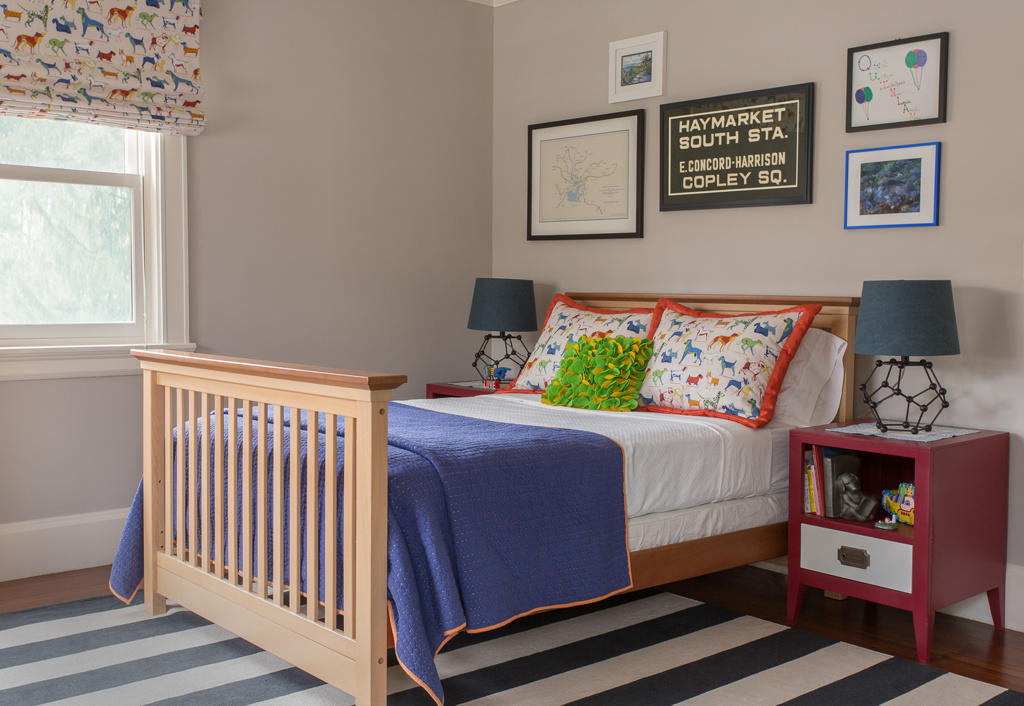 Just add cute bedding (made some shams with fabric left over from the Roman shades), nightstands, and table lamps and voila! Big boy bedroom. 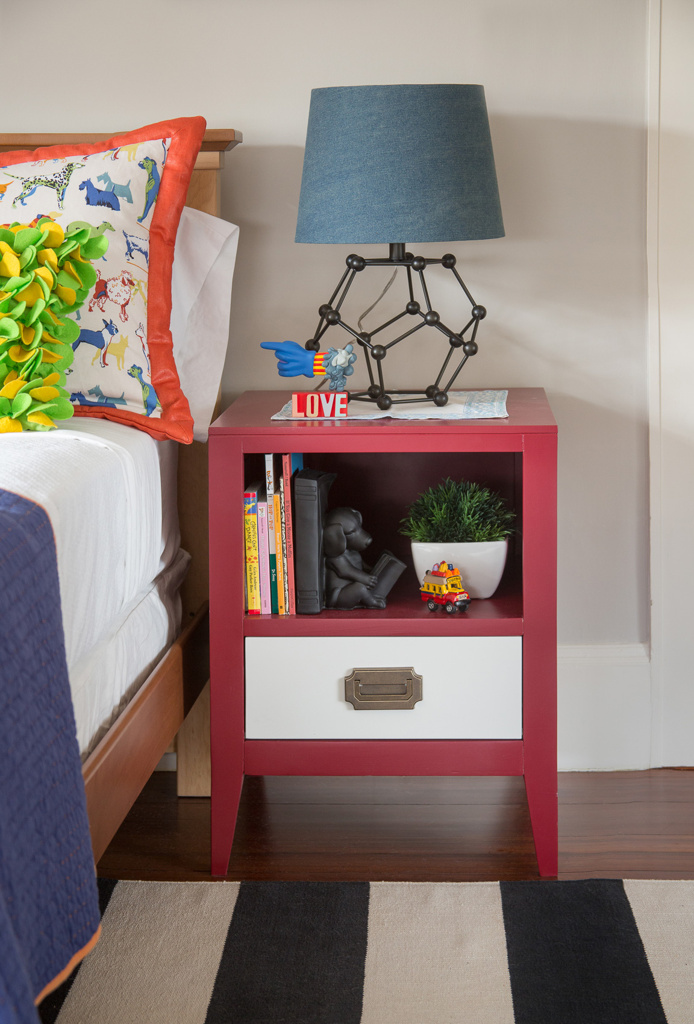 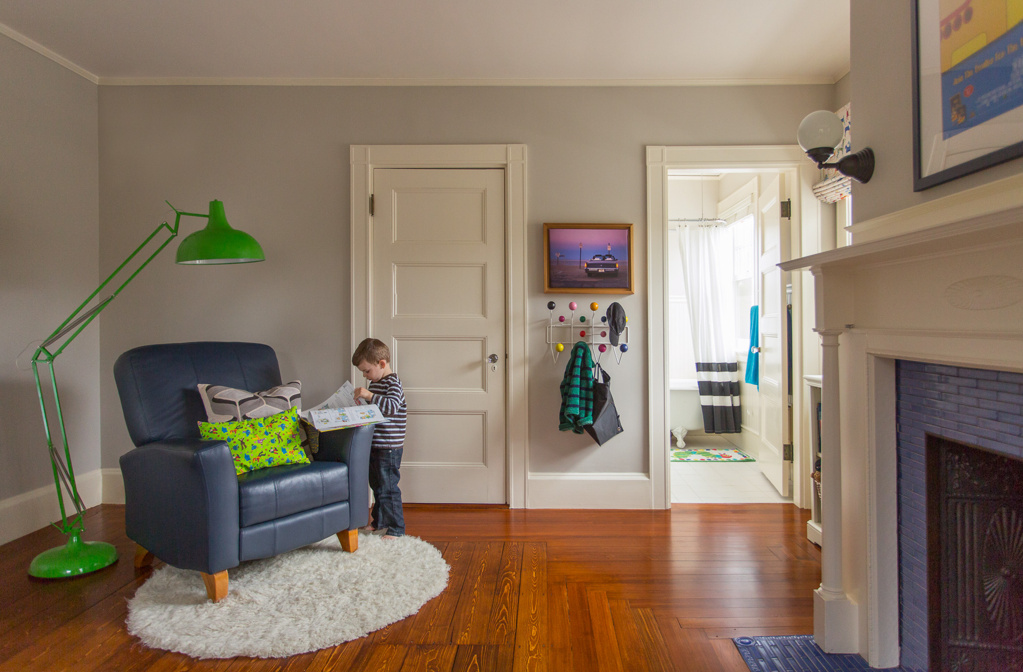 We moved the glider/recliner and bookcase to the other side of the room to make room for the bed, but didn’t move the dresser (that would have been much more of a pain – solid wood furniture is super heavy!). The glider is still there today, despite my efforts to convince him a small desk and chair might be more useful. He reads a lot in his room, but 99% of the time he reads in bed. Or standing next to it. Or hanging off of it. Even during ‘sedentary’ activities like reading, he is in perpetual motion!

In April of 2016, HGTV Magazine came to photograph our home for their December (holiday) issue that year. 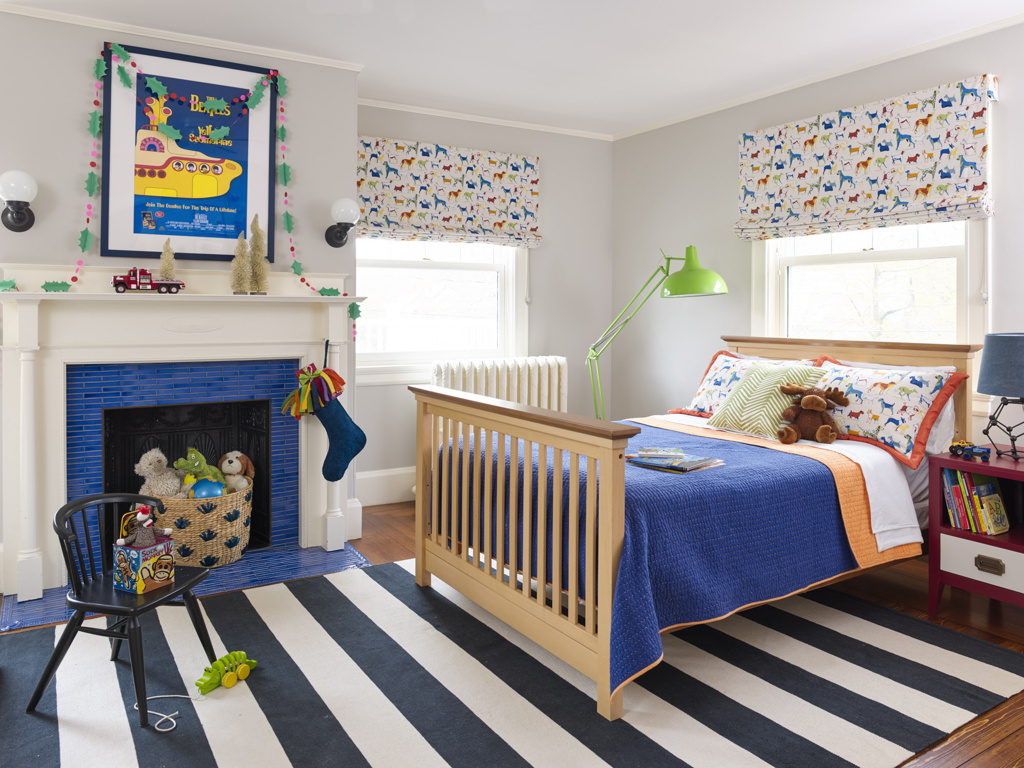 They set up the room totally differently, in order to get all of the elements they loved into one single shot.

Here’s how it looked in layout: 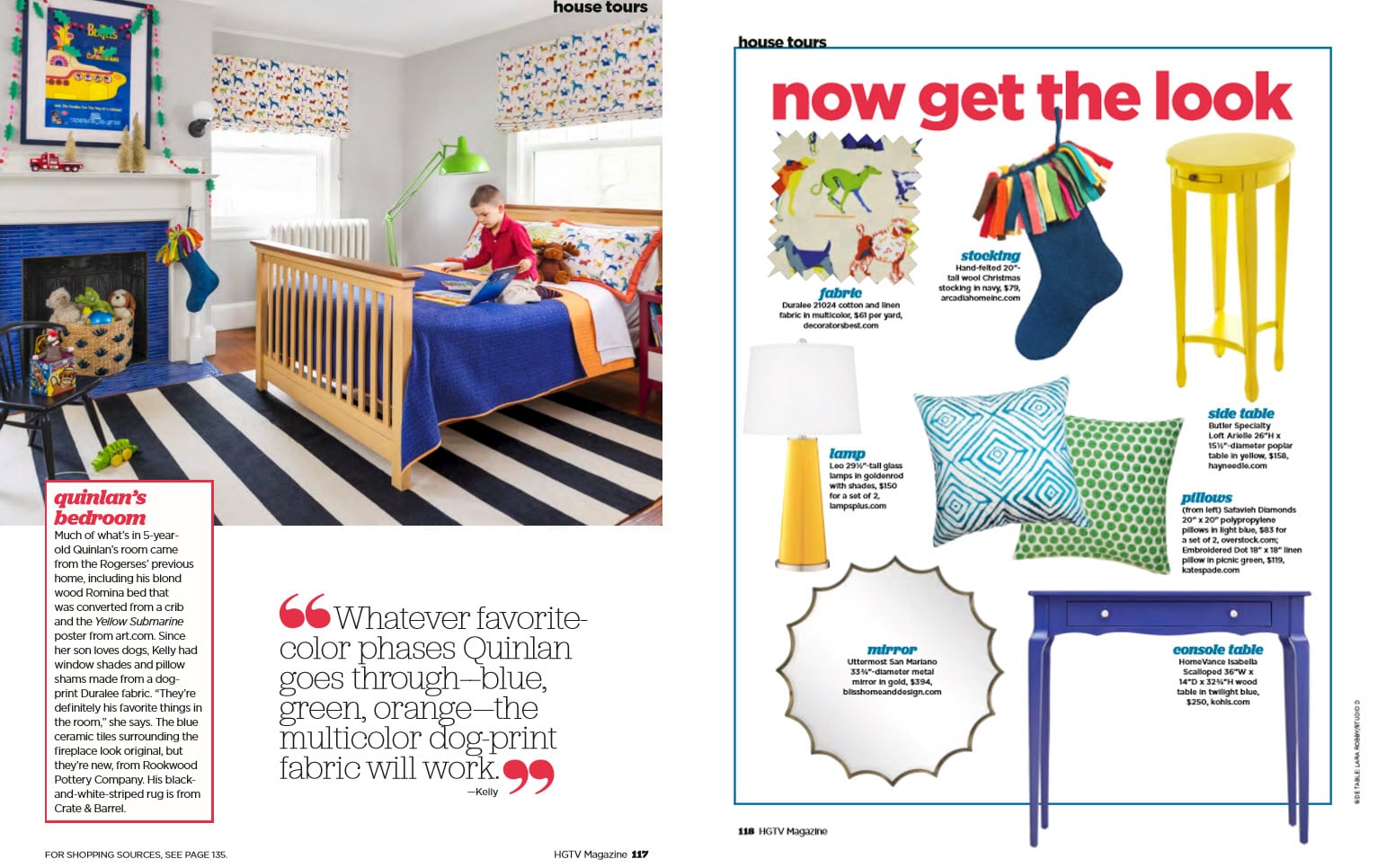 I truly can’t believe I am just now sharing this! I think I didn’t initially because of the timing of the magazine feature – everything got embargoed for over a year, and then I just lost track of posting about the project here on the blog. Is the project a tad bit old? Maybe! (We still love it!). But I wanted to still show you, and in doing so share some of my best tips for creating a nursery that can easily transition into a big kid bedroom that will be fun and age-appropriate for many years to come.

And don’t forget to come back on Thursday for the big reveal of Eamon’s big boy bedroom transition, which I dubbed “American Evolution,” since it wasn’t a total re-do…and there is a distinctly patriotic vibe (which is hard to avoid when you put an 8×10 American flag rug on the floor!). I’m excited to show you what I did, and why it really wouldn’t have been that hard, if not for that pesky tight timeframe and deadline! But that’s why we do the One Room Challenge – it is a proven method of getting stuff done, and done to the level of detail and finish that you can be proud of. And hopefully Eamon appreciates it! 🙂

Photography by Eric Roth, except where otherwise noted.