Happy Thursday! I would like to introduce this week’s featured nursery theme – Urban Jungle (minus the pollution, noise, and general hub-bub, of course!)… 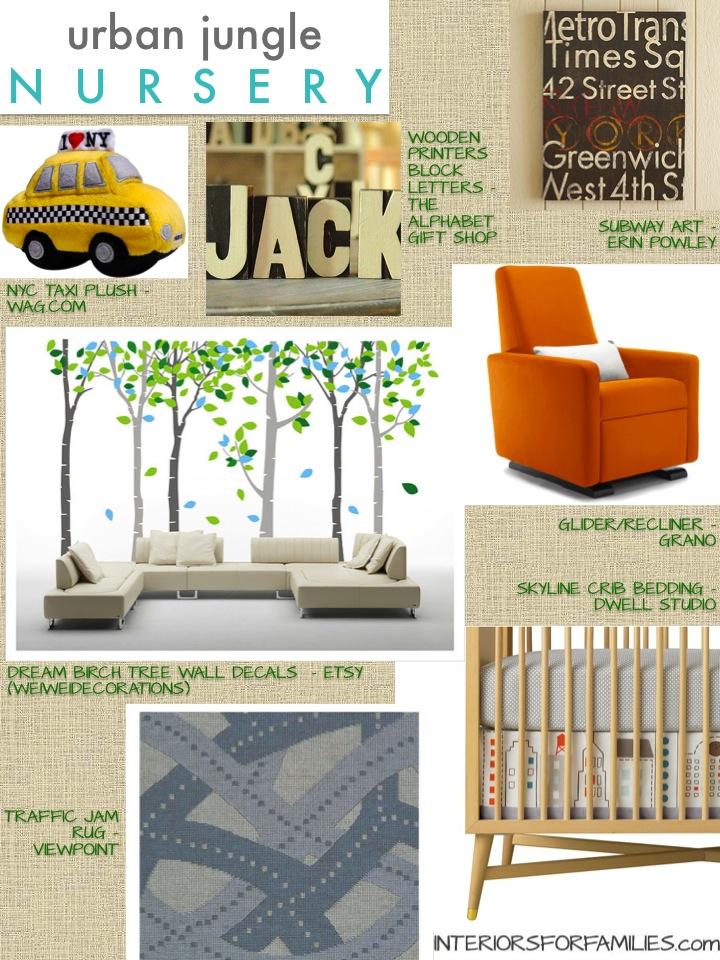 I have to admit – this one was inspired by the adorable Skyline bedding collection from Dwell Studio. I have been looking for an opportunity to feature it. I love how the city pattern is not overpowering – only appearing on the crib skirt, and with a scale fitting for an urban skyline. This gender-neutral Urban Jungle happens to be inspired by New York City, but yours could be another locale (or none at all).

The Traffic Jam Rug is just hysterical – they have three different colorways. This is Manhattan, Boston is a blue-green and pale yellow, and Miami is also available but I haven’t seen it (I’m assuming it’s coral and turquoise?). I thought it was a great way to pull through the theme without introducing a competing color element on the floor.

This room is all about pops of color against a gray/white backdrop of the city, rather than general, overall ‘big’ color (which you might know, by now, that I also do 🙂 ). One of these is the cute plush taxi cab. Don’t look too closely – it’s actually a dog toy! But totally safe for a baby to play with. Just don’t let Sparky claim it for his own; it’s a delightful accent for this nursery.

If you’ve been following Interiors For Families for awhile, you may recognize the glider from Thoroughly Modern Glider – the Grano Glider/Recliner in orange, one of my favorites.

If you were going to create a nursery inspired by Urban Jungle, what city would you choose, and what decorative elements would go with that city?